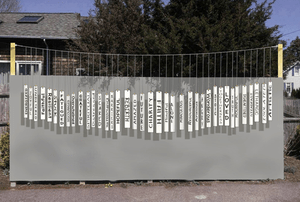 Located at the Community Mural Wall behind the JAC on Douglas St.

Tom Culora received a BFA in fine arts from the School of Visual Arts in New York where he was a four-year scholarship student. He has been a New England based artist since 2009. His mixed media work has explored themes of anonymity on the internet, the power of text and symbols, and military/political imagery. Tom’s current work combines themes of community and social issues with individual personal narratives.

Tom holds two masters degrees in international affairs and security studies and served as a dean at the Naval War College in Rhode Island from 2014 to 2021. He has been a Fellow at Harvard University’s Weatherhead Center and at the Council on Foreign Relations in New York. Serving as an active duty Navy pilot and officer, he commanded both a naval helicopter squadron and served as Captain of the USS Boxer (LHD-4), an amphibious aircraft carrier.

He is currently on sabbatical finishing a master’s degree in counseling psychology at the University at Albany and is completing his internship at Albany Medical Center. Tom will return to the Naval War College campus in late 2022 to teach leadership in the College of Leadership and Ethics. He serves on the boards of the Rhode Island Red Cross and the Herresoff Maritime Museum in Bristol, RI.